The Life and Vocation of "Dom Pedro"

Lord, you have granted our brother Pedro the gift of following Christ in communion of life and of proclaiming the Gospel, as a Son of the Immaculate Heart of Mary. Allow him now to share forever in your glory, with Mary and all the saints who have gone before us marked with the sign of faith. Through Jesus Christ, our Lord. Amen.

Below is a paper written by our Vocation Director, Fr. Sahaya Rubiston, CMF about the vocation and exemplary life of Bishop Casaldàliga “Dom Pedro”. Lo puedes leer aquí en español.

In early December 2013, 84-year-old Dom Pedro Casaldàliga, who was suffering from Parkinson’s disease, had been forced to flee from his home because of death threats from land owners. Who is Dom Pedro Casaldàliga and why did he receive death threats at the age of 84? Dom Pedro Casaldàliga is a retired bishop of São Félix, a huge area of 150,000 square kilometers in the state of Mato Grosso, Brazil. São Félix is one of the most remote places in the vast interior of Brazil. As a bishop of São Félix, He fought against the injustice done to the indigenous and poor peasants by the landlords, private companies and government officials. The fight against injustices in Mato Grosso was never a pleasant journey; however, Casaldàliga made the land better place to live in peace. 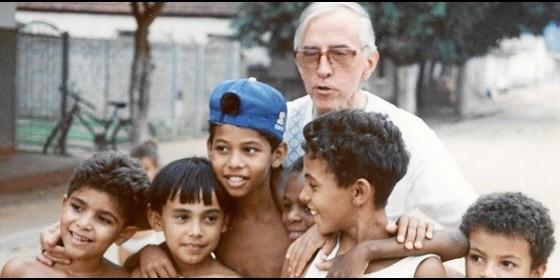 He was born in a Catholic family who raised cattle near banks of the Llobregat River in Catalan region of Spain in 1928. In 1936, when Casaldàliga was at the age of 8, his uncle Luis, a priest, and two of his companions were killed by the Republican faction “the Reds” during the Spanish Civil War (1936-1939). This war showed him something of the heroic side of Christianity. Impressed by their martyrdom and love of Christ, Casaldàliga joined the Claretian Congregation. He was so much interested in press, radio, and films and always wanted to be a writer. After the adequate years of preparation and discernment, he became a priest in 1952 at Barcelona, Spain.

While being in Barcelona, he was appointed by the superior to establish the Cursillos movement in Africa. Cursillos in Christianity is an apostolic movement of Roman Catholic Church established in Spain by a group of lay people in 1944 to train Christian lay people as effective leaders and evangelizers. When he went to Africa to build the Cursillo movement, he witnessed a different Church—poor and colonized. This experience gave him different perspective of the Church.

Now, his experience at Cursillo intensified his passion for equality and justice. Later on, he was assigned as director of the Cordimarian publication El Iris de Paz [The Iris of Peace] in Madrid. Inspired by the documents of Vatican II, he was attacking the meaningless forces of tradition in the Catholic Church. Consequently, he was sacked from the post because of an article in which he mentioned some of social declarations of the Spanish bishops as “a disappointing declaration.” He asserts that he finds no guilt in being a sign of contradiction, because Jesus was a sign of contradiction in that he never ratified any oppressive structures.

In the Footsteps of Saint Anthony Mary Claret

In 1968, Casaldàliga was asked to go to Brazil to take care of the unattended northern part of the Mato Grosso for four years. He happily accepted the assignment as he always wanted to be a missionary.

Besides, there was unjust control of land that whole agricultural land was owned by landlords. The peasants, who worked in the agricultural land of Mato Grosso, were migrants from other parts of the country. There was no doctor, no mail, no electricity, no telephone, no education. People died due to various illnesses. Government officials did not do any checking to make sure labor laws were observed. Many thousands had been killed and the police normally were on the side of exploiters.

Having spent two years in the land of Mato Grosso, he wrote a report in 1970 entitled, ‘Slavery or Feudalism in Northern Mato Grosso”, in which he speaks about all the injustices done to indigenous and peasants by landlords, private companies and government officials. He sent this report to the top government authorities and president of the national council of bishops. As a result, he was warned by the landlords that he should not be engaged with these things, rather, he should be concerned about spirituality of the people. His voice for justice and equality created a conflict with landlords. On the contrary, he gained the trust of the people; Mato Grosso accepted him as their leader. Since then, he became a symbol of hope for the oppressed.

On October 23, 1971, Casaldàliga was ordained as bishop of São Félix and during his homily, he stated more firmly his option for poor and oppressed. As a Bishop, Casaldàliga was a voice for various towns, who were facing injustices, asking to establish a just society. Serra Nova was one of them. It was a newly created town settled by the indigenous people. The Bordon Company wanted to make road through the settlement of indigenous people for the purpose of its business.

When Casaldàliga went to meet the director of the Bordon Company to tell him how the company was violating the rules of the country with regard to the land in Serra Nova, they prevented him from speaking about the land issue. Meanwhile, the Bordon Company decided to clear the forest in Serra Nova, so that all the hopes of settlers will be destroyed at bud itself. In addition, the Bordon Company was threatening to kill Casaldàliga. Regardless of any threats, he continued to fight for them and lived with the community of Serra Nova. He harvested rice with them, accompanied them while they walked, met with the families of the town, and more importantly, he celebrated the Eucharist with them. His solidarity with the people raised their hopes and confidence that they would not be run off the land.

Finally, with the help of the West Central Region Bishop Council, the National Indian Reservation, and National Institute for Colonization and Agrarian Reform, The Bordon Company was expelled from Serra Nova.

We are the Church

Casaldàliga held that the community should be led by community members and he enabled them to act for themselves. He stressed, “I cannot believe in these new dialogues, carried on by third parties at the top of the pyramid… the people--who ought to come first-- have neither a place nor a voice in the dialogue.”

The Truth Will Set You Free

Those who protested under Casaldàliga were tortured, humiliated, arrested and killed. All these atrocities were exclusively arrayed by landowners to expel Casaldàliga from the country. So, if Casaldàliga went on vacation to Spain, he would not be able to return to Brazil. Therefore, he never went back to Spain. In this regard, he affirmed, “This is my land upon this earth. This is my people. For this land and with this people, I shall walk towards the Fatherland.”

Unsurprisingly, the media, which was owned by landowners, was vigorously used to campaign against Casaldàliga. Edgardo Erichsen, the director of the powerful Globo TV and radio network, closely associated with landlords, made a violent attack on Casaldàliga with the following words: “It seems that the bishop has exchanged his crucifix and rosary for the hammer and sickle, his prayer book for the thought of Mao Tse-tung, his priestly piety for violence and that he is only waiting for the right moment to exchange his cassock for a guerrilla’s uniform.”

Dom Sigaud, Archbishop of Diamantina, accused Casaldàliga with twenty-three allegations. Some of the accusations were that he was a communist, responsible for violence in Mato Grosso, disrespectful of the teachings the Supreme Pontiff, and disdainful of the social programs of the government. Subsequently, in 1998 he was summoned to Vatican for an interrogation by then Cardinal Joseph Ratzinger (Pope Emeritus of the Catholic Church) and found not guilty in his teachings and expressions.

Amidst all these criticisms and challenges, Casaldàliga remained optimistic. He said that he was not against the Church, but he was disappointed with the attitude of the Church towards socio-political problems of Brazil. When asked about Dom Sigaud’s accusations, Casaldàliga said, “Personally I have nothing against Dom Sigaud…I even believe that he is acting with sincere good will and that he is following the dictates of his conscience. For that reason I am not going to engage in polemics with him. I wish to reply to the document presented to public opinion only because it is a biased conglomeration of mutilated texts that do not express my thoughts or my attitude.”

On 27 January 2013, all the illegal invasions and occupations of the land by landlords was removed; now the indigenous people can return to their own land who were expelled in 1966. This is the reason, why landowners wanted to kill him even at the age of 84. In a recent interview, he said: “I will never accept this system that is turning humanity into a commodity to be bought and sold.” Bishop Casaldàliga is a man of hope. He said that if we lose hope in our fight against injustice, we have lost everything.

Do you feel called to fight against injustice on behalf of the poor as a Claretian Missionary? Our Vocations Director would love to accompany you in your discernment. Get in touch with him today.